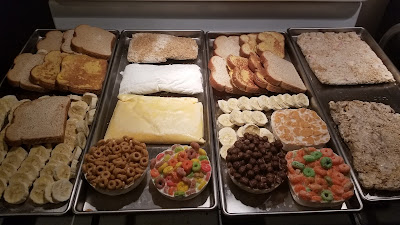 I'd been dying to FD bananas and Tony read or heard about doing cereal so those two items made the list as well as yogurt, eggs, oatmeal, bread and french toast.  Read further to see how it went reconstituting some of these items with water! 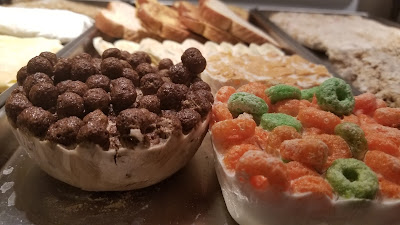 Pretty much everything on these trays was for experimental purposes and to see if we would like it. If we do, then we will do another batch with foods that were our favorites. 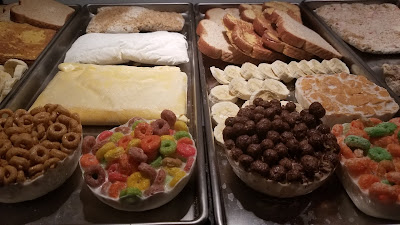 We got those little tiny boxes of cereal to have a variety. Thanks to the Dollar Tree for having a pack there! We pre-froze everything and then stuck it in the freeze dryer. I would say it took a bit over 24 hours and then we pulled everything out. 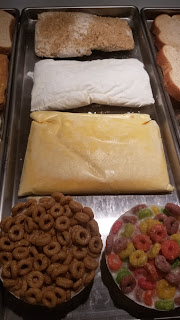 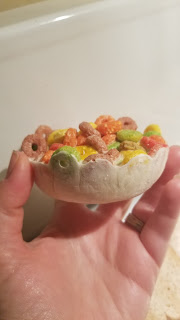 Crazy how I am holding a little bowl of cereal and milk - freeze dried version though! It is so dry and lightweight. Kinda trippy to see and feel. 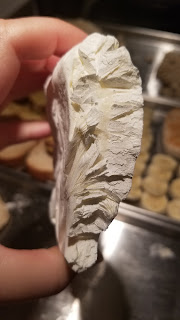 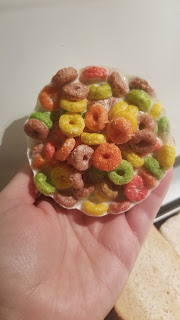 Slight fail with the yogurt in the photo on the left above. It was not quite done all the way through.
It's hard to tell from the picture but there is an area that still looked wet when we broke it in half.Not to fear, we learned that foods not freeze dried all the way can be put together with other items this may of happened to and ran on another cycle. This cycle will be a lot shorter since everything on the trays will be mostly done but you just want to get the food 100% bone dry. 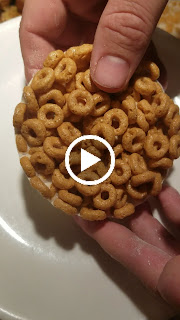 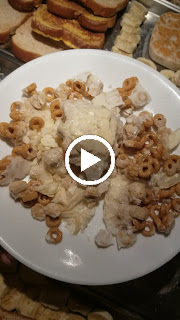 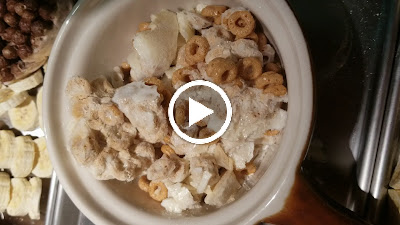 Sadly the videos will not play here and I can't click the video button to add them unless they come from YouTube. Sigh. I will have to make a compilation and upload it to YouTube then replace these fake video photos with one video that shows it all.  Check back for that. 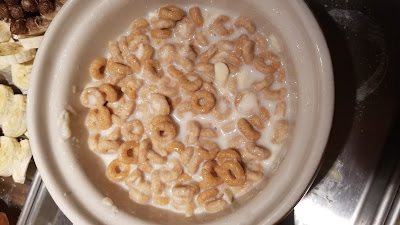 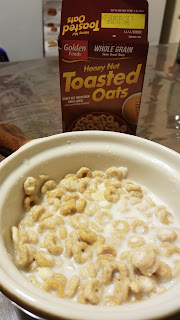 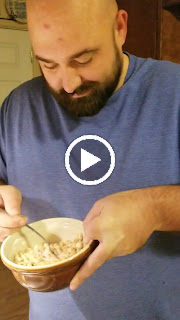 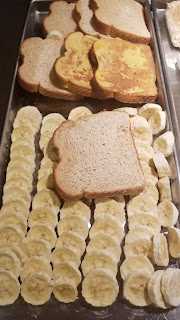 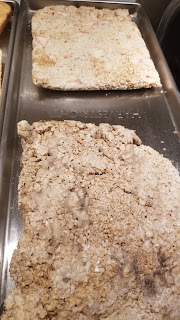 Here we have bread, French Toast and bananas on the left.
Then 2 different oatmeals on the right with fruit mixed in. 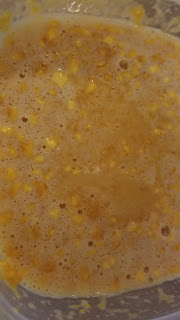 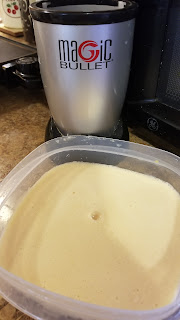 Reconstituting the eggs. A bit lumpy/chunky so instead of waiting longer for the water to soak in to every inch of the eggs, Tony whipped out the magic bullet and made the mix look so much better and usable.
Everything so far has been interesting. The cereal, some parts were a little soggy but I think in an emergency, eating it quickly would be fine and not too bad.
The French Toast has a bit of a learning curve. In one of the Facebook groups someone said they dip the French Toast in to boiling water and then lay it on the hot pan to reconstitute. We tried this, even added a glass lid on the flat pan to see if that would help 'steam' it back to normal. Tony was not a huge fan overall of the French Toast. I didn't think it was too bad. There were a few parts that tasted more dry because maybe we had not waited long enough or should have left it in boiling water for longer. It will take more experimenting to find the best way. Other people in the Facebook group make French Toast sticks and just munch on them 'raw' - not reconstituting. I guess it might just depend what your preference is.
Previous Post Next Post