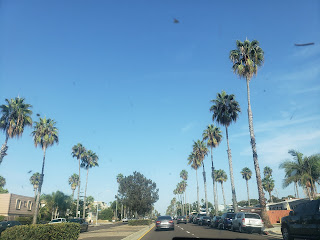 Must get out of Ridgecrest! Smoke smoke everywhere from surrounding fires and it's been not so fun to say the least. Trying to stay inside and limit outdoor activities.  So when we got the invite from our friend and hot air balloon pilot from Arizona, Judy, to join her at a place she rented in San Diego, we jumped at the chance to go join her. Great timing! 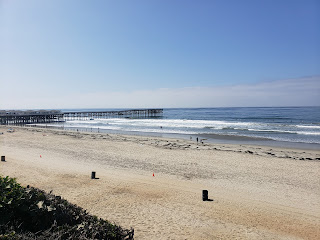 My first photo of the beach, walking out to a photo spot area above the sand. Not too crowded the whole time we were there which I was grateful for. 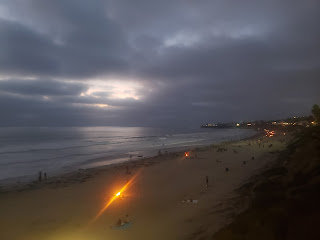 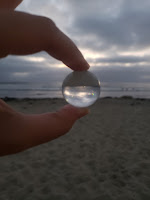 So many bonfires on the beach, to the left and to the right. It was cool to look out and see them and made me wish we had brought stuff to make our own with s'mores but we just enjoyed sitting on the beach this time until it got chilly. 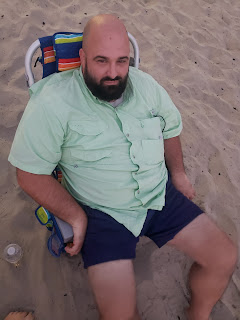 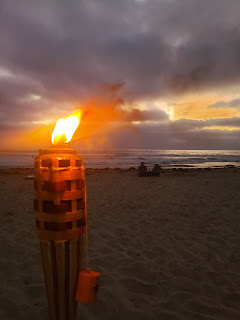 Tony...showing some leg.
And a cool Tiki torch photo that a group of people came and set these up, a firepit and chairs and then just disappeared. Hopefully they came back later to their setup but in the meantime...I scored this photo. 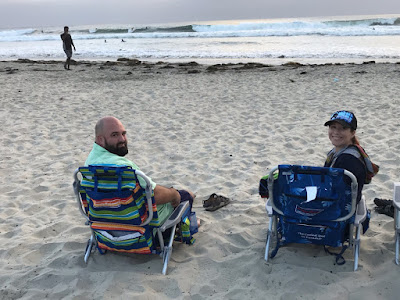 Thanks to Judy for taking these photos! 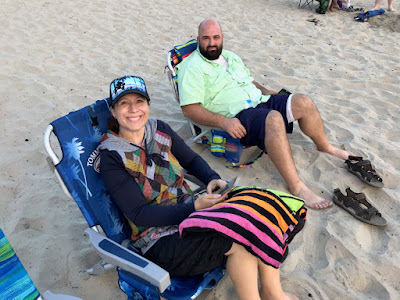 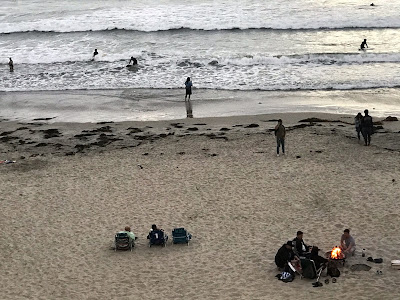 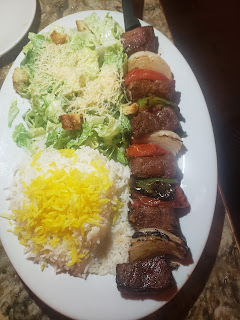 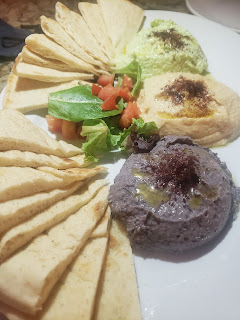 Tony & I went to a kabob place in Del Mar that sounded good and it was indeed good. We ate outside and shared a beef kabob with rice and salad and also got this sampler hummus trio. The green hummus was my #1. 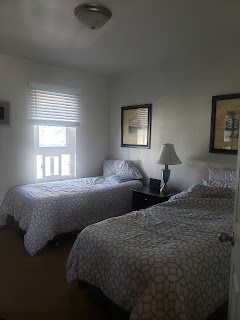 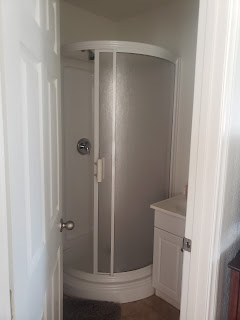 This was the room we stayed in and Judy had her own room. We also had our own bathroom and this "rolling shower" which my dad said once when we went to a hotel and I didn't see anything "rolling" about the shower and was disappointed. I've looked for one ever since and wah-lah...umpteen years later, I think this is it! The beds were a-ok and there was no ac, we just left all the windows open at night (second story) and it worked out great minus some noisy people outside but we both eventually got so tired we drifted off to sleep despite the excited voices outside. 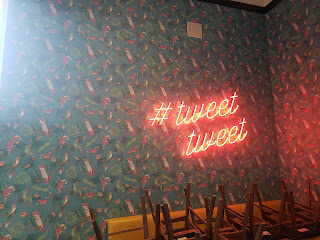 Sunday morning we went to Del Mar to this place I had seen the night before, Parakeet Cafe. Squee! Sadly it was not like a "cat cafe" where there are cats roaming around as you eat. There were no birds that I saw except on this sweet wallpaper inside. Ah well. 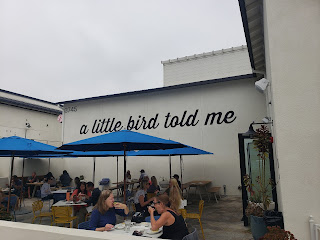 We ate outside and actually met my friend Griffen here. We've been online friends for years and years. I dont even know how we started being friends? Hot or Not? Yahoo chat rooms? MySpace? I was messaging friends who lived in San Diego and he was one of them and the only one really who could actually meet up. I was a little nervous because we've never met in real life but he is soo chill and kind and down to earth. It was fantastic to meet in person after all this time! 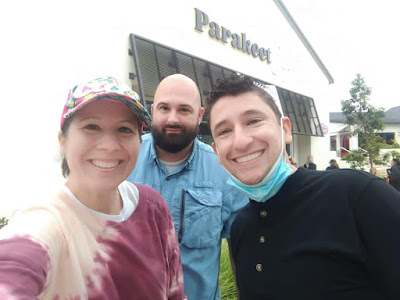 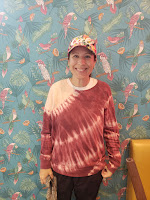 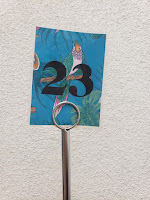 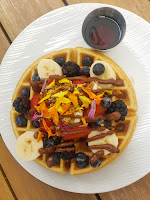 Plus the food was really good. I was a little wary of the menu but this waffle was delicious - Tony & I shared it as their prices were a bit expensive and we had spent a lot on dinner the night before. But I'd totally come here again and have this waffle. It was so pretty. 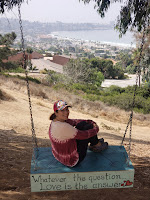 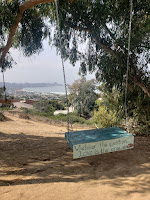 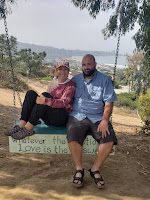 After breakfast Tony & I went to find the "secret swing" which apparently there are a few of them but this is the one I really wanted to find. My friend Taryn had taken her kids here just a day or two ago and it reminded me that I wanted to go here. It finally worked out! There were some yoga ladies doing a photo-shoot but they gladly stepped aside (and offered to take pictures for us!) so that we could get a few shots here. Fairly easy walk from the parking lot and the views were A+. 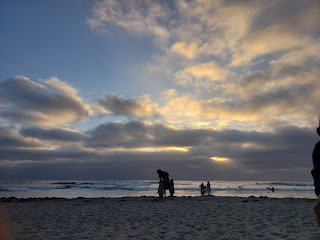 So peaceful and relaxing. The ocean is definitely one of my happy places. 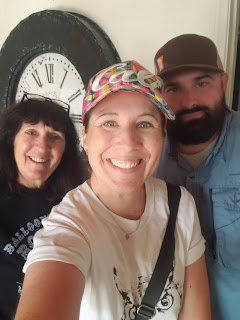 Huge thanks to Judy for the invite, I am so glad it worked out to come. I wish I had taken more photos. Besides everything I posted about, Tony took me to IKEA and he napped in the car. I waited about 20 minutes perhaps to get in and was able to find some items I'd been wanting, and some I didn't know I wanted. Lol! We also went to the Daiso store the next day, stopped by Temecula to drop off something to our hot air balloon pilot friend Kim, ate at Phil's BBQ and stopped at Michael's and Winco before getting back to Ridgecrest. It's fun to get out of town and do something different.
Previous Post Next Post