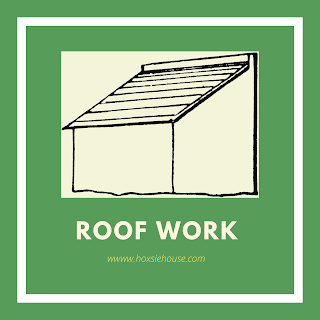 *This post may contain affiliate links*
Since we are doing this project in the middle of the Ridgecrest summer and not taking time off of work to do it this project will take a while to complete. The plan is to wake up early in the morning and to work a couple of hours while it is cool outside and then to do another couple of hours at night when it is not too hot.
Removing shingles (6 hours over 3 days)
This part was relatively easy and requires more hard work than technical knowledge.  We where able to borrow a few tools from friends that you should get if you are going to be doing this.
https://www.homedepot.com/p/HDX-47-5-in-Shingle-Stripper-THD-47-5/203495866
https://www.homedepot.com/p/HDX-41-in-Shingle-Fork-THD-Fork-41/203495870
We used the shingle fork to take off 2-3 rows of shingles at a time going from one side to side and starting from the top. I don't know if it was the age of the shingles or the technique that I was using, but I would say that 60-75% of the nails stayed in the roof. After the shingles where off we used the Shingle Stripper to remove the nails left behind.  This part can be therapeutic and doesn't require hard work or technical knowledge.  You just sit down on the roof and pop out all of the nails you can reach before scooting down.
Remember to wear gloves!  I didn't on the first day and got 3 big blisters and a gash in my hand from shingles hitting it.  You might be able to get by with just the stripper and without the fork if you are trying to save some money.  The one issue that we had was that the gap in the shingle stripper was either not big enough or needed a steeper angle.  This made it so the nail shank would hit the flat edge of the stripper and I would not be able to pull up the nail.  I would try to use a stripper that came more to a point like the one bellow if I was to do it again.
Bully Tools
Permit and board (2 Hours)
Our old roof had a space where the shingles and underlayment where missing so we ended up having to replace one 4x8 piece of plywood.  Since it was just one piece I just got on a step ladder and kind of threw/slid it on top of the roof.  I would not recommend doing it this way, but no injuries or death occurred sooo #donttellmymom.  Getting the old piece off was easy enough and the new one required about 1/8 inch to be trimmed off before it would fit. After it was in we nailed it down according to the nail patterns on the other boards and it was good to go.
I went over the roof and made sure all of the other nails where driven down all of the way and replaces a few that where missing (I think I pulled them out with the roofing nails) before calling the inspector.  By this time it was Friday and we missed the cut-toff for same day inspections, so he came the following Monday to look at everything.  He was very nice, got up on the roof and gave it a quick once over before signing off on this portion (in total we will have 3-4 inspections).  The whole thing took 10 minutes and this included talking to him about the solar and the next steps I needed to take before calling him back.  Since I am doing a roof and solar replacement together I didn't know how much of the solar equipment he wanted on the roof before doing the final roof inspection (it ended up being everything except the panels).
Cleaning up (5 hours over 2 days)
This included 3 dump runs which was about 2 hours of driving in total.  We used a flat bed trailer with no sides so we didn't want load it up to much; if we had sides on the trailer or a truck maybe we could have done it all in a single run.  We still have a couple of piles or weeds and debris that we need to put in our trash can and we might buy a magnetic sweeper to to get any loose nails that are still in the ground.
Previous Post Next Post