Hoxsie House Backyard Transformation
This is a project I have been hoping to do for a very long time. I have stared at the dirt and weeds in the backyard for a few years now and I am ever-so-thrilled that Tony finally got on board with me for this project. And to be honest, he has done a majority of the work with it as you will see from this post. Keep reading to find out what we've done so far! 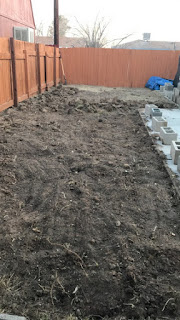 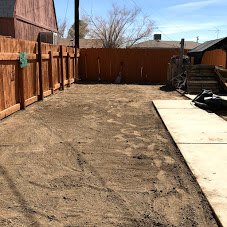 From that to this - a big and better difference! Tony turned up all the dirt and then stomped it down with a tamper he rented locally. We try to borrow or use what we have but that was something we were definitely not going to buy and we were not certain of anyone who might have one. We rented it for 24 hours and got the job done. 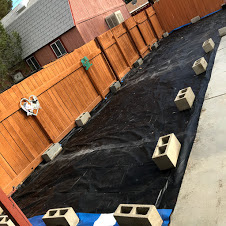 After tampering, we laid down billboard vinyl tarp we had purchased in Las Vegas via Facebook Marketplace.  We used cement bricks to hold it down since Ridgecrest is often windy.
We found some artificial turf scraps on Facebook Marketplace in San Diego so we went down and they were loaded into a trailer some friends let us borrow. 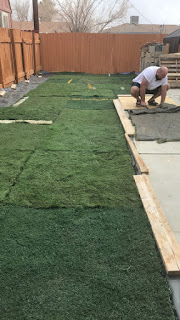 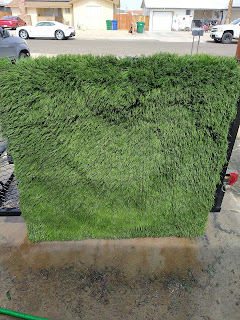 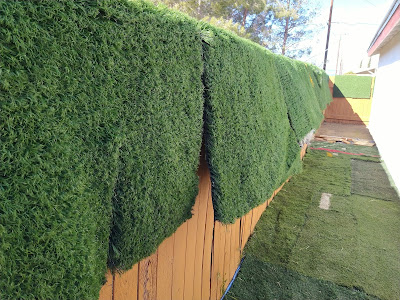 We knew that the pieces were not going to match each other so we decided to lean into it and make a checkered board pattern.  This allowed us to use the scrap pieces more effectively and have a more unified look.  We started by cutting the turf into 4x4 pieces using a half of a sheet of plywood as a template.  Then we powerwashed the pieces to get the dirt/sand/infill out and hung them on the fence to dry. 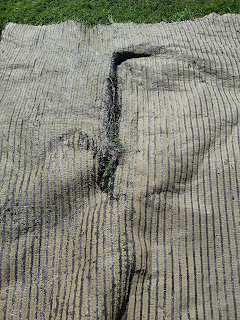 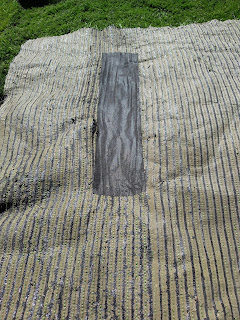 Some of the pieces had tears but Tony ordered some special tape and was able to patch any problem areas. We are not sure if this was really needed, but it was cheap and easy enough to do. 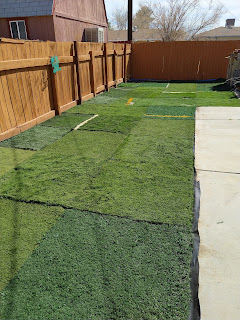 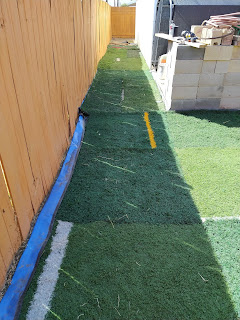 Originally, we had planned to just do this left side of the yard where our garden boxes and firepit had been. But we had enough to start going down along the fence behind the she-shed. The pieces along the side are a random patchwork of stuff that would not cut into 4x4 squares. 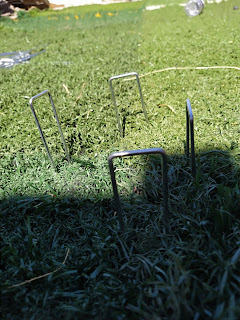 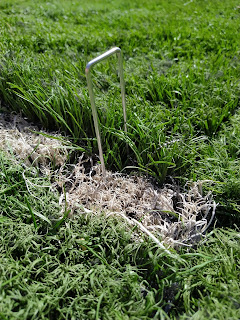 We got stakes online meant for turf grass and staked them down throughout each piece.  It is hard to tell from the pictures, but the picture on the left is a corner were 4 pieces come together and the right picture is in the middle were to sides come together.
So this is where things are currently at. Partially finished and more to do! It's great looking out to the left of the yard and seeing some green. We will cut an area for the firepit to be built back up and we are planning to do a bucket garden this year and are collecting buckets for that. I am not certain if we will keep the buckets on the patio or out on the grass. Other things I'd like to do:
- 2 posts for a hammock
- make a smaller size version of Seven Magic Mountains
- Some fun murals on the fence for posing with for my Sunday style outfits
- Corn hole game.
What else should we do or add? Leave me a comment and tell me what you think!
Project costs Analyst:
From the trailer of turf we got 25 pieces that were 4'x4', 10 pieces that were 3'x4' and then some longer scaps that we used on the 5'x30' run between our sheshed and back fence.  In total we got 670 sqft of usable turf which means we spent 15 cents per sqft on turf.  Most places are charging 50 cents to a dollar for scrap turf so if you don't mind having a checkered pattern this saves a lot of money.
Here is a breakdown of some of our other costs which brought the total cost of this project up to $269 or just over 40 cents a square foot.
Tamper rental: $100
Tarp: $35
Aftifical Grass: $99
Turf Tape: $15
Stakes: $20
Previous Post Next Post